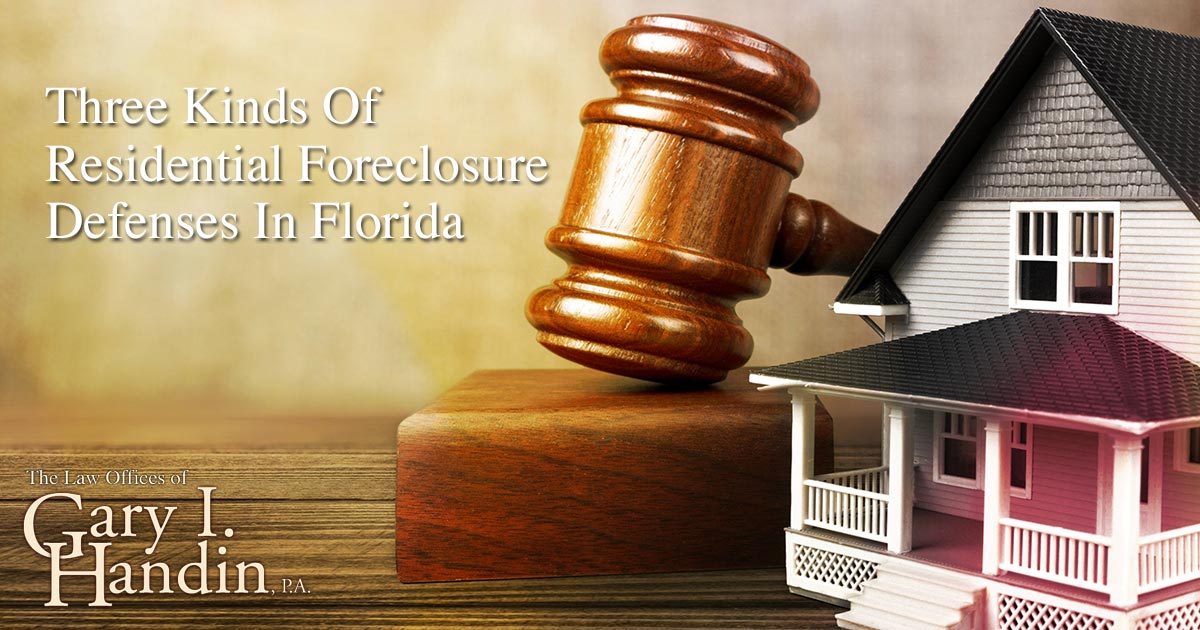 Statistics show that in the first six months of 2019, Florida is the state with the fourth-highest foreclosure rate in the country. In December of 2019, over 600 foreclosure actions were filed in Dade County, close to 600 foreclosures filed in Broward County, and more than 350 in Palm Beach County. As a result of the high number of foreclosures, the courts are backlogged. It takes an average of between 180 to 200 days to process an uncontested foreclosure through the court system.

If the foreclosure is contested, it takes even longer. Although contesting a this action can be difficult, there are still valid foreclosure defenses available.

What Are The Three Kinds of Residential Foreclosure Defenses Available in Florida?

Is There a Valid Mortgage?

If the defaulting homeowner is able to prove there isn’t a valid mortgage than the foreclosure action will fail and the homeowner will prevail. There are 2 avenues available to attack the actual validity of the mortgage. To prevail, the homeowner must either prove fraudulent activities on the lender’s part or that the statute of limitations on the claim expired.

How To Show Proof Of Fraud

Unfortunately, proving all five of the fraud elements can be a difficult standard to meet. The other available avenue is to prove that the statute of limitations expired. Section 95.11(2)(c) of the Florida Statutes provides that the statute of limitations to foreclose a mortgage is five years. If not foreclosed within those 5 years, the mortgage companies’ cause of action can be dismissed with prejudice.

In the case of Bartram v. U.S. Bank, N.A., SC14-1265, however, the Florida Supreme Court held that where a mortgagee’s prior foreclosure action was dismissed with prejudice, its subsequent foreclosure case isn’t barred by the statute of limitations so long as (1) the newly alleged default date post-dates the dismissal of the first action and (2) the subsequent lawsuit is filed within five years of the newly alleged default date. So, even if the mortgage companies’ prior claim is dismissed, based upon the Bartram decision, the mortgage company can still assert a new cause of action against the homeowner who remains in default.

Did A Legal Default Occur Under The Mortgage?

There are cases where the homeowner isn’t making their monthly payments on time but consistently pays the mortgage late. Should the lender accept those late payments but still file a foreclosure action, the homeowner can raise an equitable estoppel defense under the following conditions:

Did The Lender Have The Legal Right to Accelerate the Loan?

If the homeowner can prove they relied upon the statements and/or acts of the lender to their detriment, then the lender is stopped from attempting to accelerate the debt.

Another available defense under this category is if the homeowner can prove that the lender was involved in improper or illegal activities. If so, then the foreclosure action will fail. The basis for that failure being that the lender has” unclean hands”.

Getting Help With Foreclosure In South Florida

If your house is in foreclosure, or if you have any questions regarding Florida real estate, please feel free to contact the law offices of Gary I. Handin at (954) 796-9600 to schedule an appointment today.