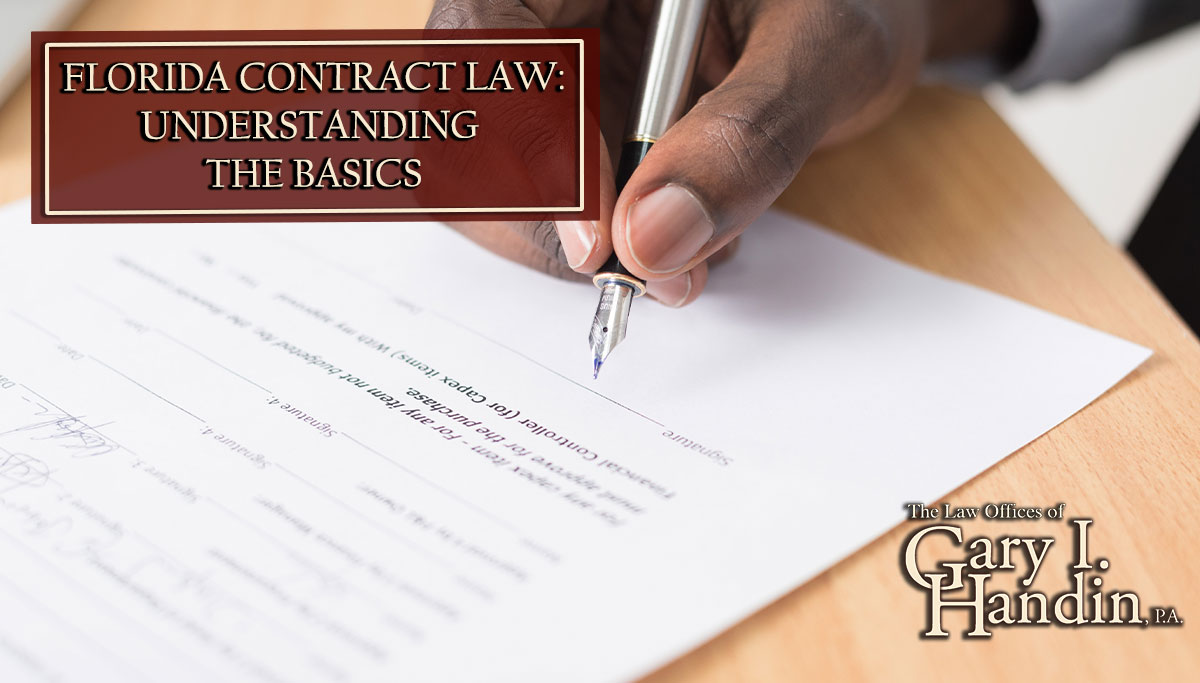 It may sometimes appear that law, with its complicated concepts and terminology, is the exclusive domain of lawyers. But the law is constantly operating in the background of some of your most simple daily interactions. Contract law regulates the thousands of transactions you will enter over the course of your life, whether you’re purchasing a vehicle, a carton of milk, or a mobile phone plan.

Having a basic understanding of contract law is a good way to empower yourself as a consumer. Let’s explore the basics of Florida contract law below.

Requirements For Creating a Binding Contract

An important starting point is to consider how binding contracts are created in the first place. At the most basic level, a contract is an agreement between two or more persons or entities, who are typically referred to as the “parties” to the contract. A binding agreement is created when one party makes an offer, which includes a proposal of the terms of the contract and the consideration to be exchanged and the other party accepts such offer. Without an offer and acceptance, there is no contract. Contracts can be verbal or written. The laws of the State provide which types of contracts must be in writing in order to be binding upon the parties to the contract.

As a general principle, binding contracts can be written or oral. An oral contract is concluded when the parties enter into their agreement verbally. Florida contract law only requires that certain types of contracts (such as contracts for the sale of real estate) be set down in writing.

It is always better for parties to put their agreements in writing, regardless of the type of contract. This makes it much easier to prove later what the terms of the contract were if a dispute arises.

When a party breaks the promise made in the contract, this is called a breach. If the party who has suffered this breach and has suffered damages as a result of such breach, that damaged   party may choose to bring a lawsuit against the breaching party. If he damages party chooses to sue the other party, they may request that they be paid compensation (damages) for the breach, or request that the other party fulfills the promise made in terms of the contract.

To sue for damages, the party suing will have to show they suffered a loss because of the breach. The Florida Statute of Limitations sets out timelines within which a party must file their claim (i.e., sue) after a breach.

Does Florida’s Contract Law Provide For A Cooling-Off Period?

Florida or Federal contract law may include a three-day right to cancel certain types of contracts. This is often referred to as the rescission period and is designed to afford parties a chance to cancel the contract if they entered into it quickly without first considering all the facts.

There is no right of rescission unless the contract states that there is such a right or there is s state or federal statute creating such a right. Therefore, you must be certain of what you are signing, because in most cases, when the ink in on the paper, you may not rescind the deal.

Generally, parties to a contract will set out the circumstances in which they are entitled to cancel the contract, and the notice period to be given. If you are unsure whether your contract includes a right to cancel (usually referred to as a ‘right of rescission’), or how to lawfully exercise this right, it is a good idea to consult an attorney.

If you are having trouble interpreting a contract you have entered into, or are considering entering into a complex transaction such as the sale of a business, it is strongly recommended that you consult an attorney.

Handin Law has over 50 years of experience in assisting clients with their contracts and is one of South Florida’s most trusted law firms. Give us a call at 954-796-9600 today to find out how we can help meet your legal needs!